Luis Alberto Urrea, 2005 Pulitzer Prize finalist for nonfiction and member of the Latino Literature Hall of Fame, is a prolific and acclaimed writer who uses his dual-culture life experiences to explore greater themes of love, loss and triumph.

I first discovered Luis Alberto Urrea in 2006. Although I'd grown up as a Mexican American in a college-educated, average income family, in a very Mexican American working class neighborhood in the Los Angeles area, and I had friends in high school who identified as Chicanos and Chicanas and with La Raza, I had never considered myself a political person or interested in immigration rights until about my late 20s.

In March of 2006, I attended my first ever immigrant rights march in Austin, Texas. We started at the Capitol and walked all over downtown. I felt a sort of solidarity, and yet detachment, all at once, from everyone else marching in the group. We were of the same race, but from different circumstances. Although my parents had their own financial hardships trying to move here in the late 1970s, they were able to move here legally with green cards and became U.S. citizens when I was in elementary school.

Later that year, I attended a panel on U.S.-Mexico border and immigration issues at the Texas Book Festival - two of the authors on the panel were Diana Washington Valdez and Luis Alberto Urrea. I purchased Valdez' book, Cosecha de Mujeres, and two of Urrea's books, Across the Wire and The Devil's Highway.

Several years later, he gave a talk in Austin, which I also attended. The more I heard him speak, the more I was fascinated by the fact that he was another sort of fellow "undercover" Mexican. As he describes himself in the excerpt below, as a "big Irish-looking Spanish-speaking dude," I've often been curiously queried about my ethnic background.

Although I've never been classified as looking Irish, people have asked if I was Italian, Greek, Armenian, Jewish, Filipino, or Hawaiian. I am fairly light-skinned as far as Mexicans go, although I do have brown hair and brown eyes. I don't speak Spanish on a regular basis, I partake regularly in sustainable gardening and composting, and I listen to American country music of the 1930s. Even though both my parents are of Mexican descent, whereas Urrea was born to a Mexican father and American mother, I can relate to his "dual-culture" life.

Below is an excerpt from Luis Alberto Urrea's "Compadres" featured in the Las Comadres anthology Count On Me: Tales of Sisterhoods and Fierce Friendships: 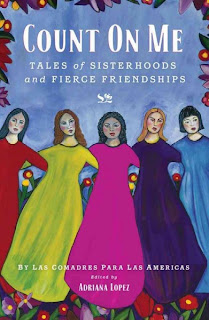 I left again. I had a life to lead, I had books to write, I had my own mistakes and bad mojo to confront. But this time I left her with her first bank account. The bankers didn’t want her to enter when we went downtown—she wore her best shiny gold lame slippers. They stopped us at the door, this odd couple: the tiny Indian woman (Tarascan) and the big Irish-looking Spanish-speaking dude holding a baby. What must they have thought?

The bank manager, a nasty little bastard in a tight suit and bleached hair stopped us and said Negra could not enter. I could. But, really, what were we thinking bringing her type to the bank? I fanned out $1,200 in American twenties and said, “This is hers. Can she come in now?”

Oh, the bowing; oh, the manners.

I also had Western Union, that mainstay of the remittance money tide that floodedMexico. “La Western,” they called it. Negra would call me collect from a payphone near the little bodega in Juan Rulfo and tell me how much she needed.

When I returned, I returned because National Public Radio wanted me to find her. A producer followed me around with a mic and a recorder. It was, again, surreal. And this was the era when Negra made her impossible six hundred dollars for talking.

We were put up in the ritzy Camino Real. By any measure, a fancy hotel. Negra was too scared of the rich people to go alone, so she took her eldest daughter, Nayeli. They put on their best clothes, and we arrived at the hotel, and they balked at the escalator. They had not ridden escalators.

As we rose, and the great marble walls and the overhead lights revealed themselves, Negra turned to me and said, “I don’t belong here, compadre.”

I said, “The only difference between you and these cabrones is that they have money.”

We entered the vast lobby, and there, to Negra and Nayeli’s shock, sat several Mexican telenovela actors. One guy with silver hair was reading a magazine, and they gasped, “Es Don ____!”

...We entered their room and two things happened immediately: Negra went to the beds and felt the mattresses while Nayeli went right to the bathroom and turned on the water in the bathtub to see it spill out. The next thing that happened was Nayeli, falling on the bed, and asking, “Luis, how do we get MTV?”

They were hungry. I showed them the room service menu. It had pictures of the food.

“Your hosts will pay.”

Nayeli found pizzas. She called them “piksas.” I showed her the number to call and went next door to my room. A few minutes later, my phone rang—it was Nayeli.

“What number do I dial to order ice cream?” she asked.
Posted by Hair Thingies