Thoughts on Being a White Privileged Hispanic

When I was growing up in a primarily Mexican American area of Los Angeles, I was told I looked and acted "white" by fellow Mexican Americans. In Mexico, I was called a güerita, which technically means "blonde," although my hair is a medium-brown color. After moving to Austin, living in a primarily "white" area, I would occasionally get asked about my racial or ethnic background – it was not always obvious, it seemed.

I was born and raised in the United States, but both of my parents – and at least 2-3 generations before them – were born and raised in Mexico as Mexicans. My first language was Spanish, and I can still speak, read, and write Spanish. So I began identifying as an American girl with Mexican heritage. It made the most sense that way.

There have been recent events in Austin where the local food / urban farm movement has been seen as one made up mainly by "white privileged people." Does that mean I am a white privileged person because I am part of this movement? The U.S. Census gives me the choice of White, Black or African American, American Indian or Alaska Native, Asian, and Native Hawaiian or Other Pacific Islander – with the option to choose Hispanic/Latino* as my origin.

*Hispanic refers to people whose origin is Mexican, Puerto Rican, Cuban, Spanish-speaking Central or South American countries, or other Hispanic/Latino, regardless of race.

According to the U.S. census, I am a "white Hispanic." What if I didn't consider myself white? My parents and three of my four grandparents are all darker skinned than I am...but if you wanted to get very specific, they are actually "olive" skinned. I have relatives who are very "brown." My skin is more accurately "creamy natural" or "buff beige," according to the make-up industry. At least they seem to recognize it's not a black and white world.

I also recently stumbled across the novel "Caucasia" by Danzy Senna. I haven't read it, but I looked it up on Wikipedia, and the description says: "Caucasia" brings up the conflict between race as a phenotype versus race a performance. Race is more than skin deep and requires a certain life practices to accompany your race. For example, being white is more about having a great deal of success in life than the color of your skin.

Ah! Ok, so really, it's not so much about the color of my skin. It's more about socio-economic class. So how does one define success? What is privilege? My parents moved here from Mexico in their early 20s, without having finished college. After running a little taqueria in the rural outskirts of Aguascalientes, they decided that they needed to move to the United States to provide a better future for their children.

My mother did eventually go back to finish her college degree, while working full-time and raising us kids. My father worked as a service technician with Sears. We shared houses with relatives until I was in the 4th grade, when we moved into our very own 1000-square-foot house that was in need of some serious repairs in a working class neighborhood in a very industrialized suburb of Los Angeles.

I went to college, thanks to giant school loans that I will have to repay for the rest of my life. I am also now paying a mortgage on a cheaply-built 1100-square-foot home from the late 1970s in a working class neighborhood in a non-trendy part of town. But it's comfortable, and I feel safe in it. I recently acquired a new-ish used car that I share with my "white" husband (before that, we shared a 1983 mechanically-failing Mercedes Benz that I had been driving since 1998).

I always have enough healthy food to eat (mostly from the local farmers markets), but I don't have health insurance. I wear my clothes until they literally start to fall apart, and then I sew or patch up the holes. Most of my clothes are hand-me-downs and thrift store finds. I do work that I enjoy, but I do have to work 50-60 hours a week to make it happen.

I am able to save a little bit of money – for emergencies and very occasional frugal vacations – only because I do not indulge in buying material things, and we do all the home cleaning and maintenance ourselves. I actually hate shopping. We do enjoy going out to eat, but we have to limit how much we spend and how often we do it.

Do these things define success and privilege? I don't know. Maybe they do, maybe they don't, depending on who you ask. It's all relative anyway, isn't it?

I work as a grassroots activist with a nonprofit and am a freelance writer, and my husband is a freelance musician creating hard-to-sell music. We could both have chosen a corporate career path and could arguable be in a position where we'd be far more privileged and successful than we are now. But we didn't. We chose not to. I suppose that is a sort of privilege. We choose to live the way we do. Nobody forced us.

Given what society all around me is telling me, it's pretty hard to argue against the idea that I am a white, privileged Hispanic. But what happens if I want to reject that label and all that it implies? Another idea out there is that those people who are either privileged white people – or privileged / disconnected people of color – who don't acknowledge these labels and that they are part of a racist system are...well, I'm not sure what they are. What do you think? What does that make me? Maybe it makes me racist, too. Naive? Blind? Wrong?

Perhaps, what if...I am just human. 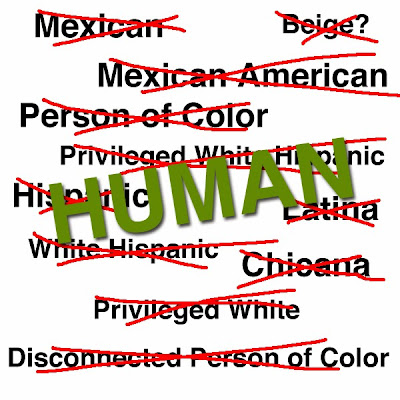 Email ThisBlogThis!Share to TwitterShare to FacebookShare to Pinterest
Labels: Mexicanness, This is America